Maps are Items that were added to Minecraft in Update 0.14.0. They are used to create a visual image of the world and to pinpoint the Player's location and coordinates.

Maps can be obtained by Crafting them in a Crafting Table. Maps can also rarely spawn in Strongholds of the surface above.

As of Update 1.2, Players can select an option to spawn with a Starter Map when creating a new world.

Maps are empty when Crafted, and are gradually drawn as the Player explores with the Map equipped in their Inventory. Maps can also include an indicator which shows the Player's location (and direction) in real time. Other Players can also be seen, if they are within distance of the Map. Maps can also be displayed in Item Frames.

Note that if one of the copies of a duplicated Map is updated, the other Maps also get the updates. This allows for mapping efforts where one copy resides in a Map display, and the other is carried by an exploring Player.

There are 5 Zoom levels:

Contrary to earlier versions in Minecraft Java Edition, when Maps are zoomed out, they will not overlap with other Maps at the same zoom level. This helps aligning Maps.

Added in Update 1.1, Explorer Maps are special Maps that aid a Player to locate Woodland Mansions and Ocean Monuments.

Exploration Maps differ from a normal Map, in that it shows the area's land-water outline, as well as an orange striated texture for areas below sea level, and the blank map texture for land above sea level. The Explorer Map then fills in once the player reaches the mapped area. 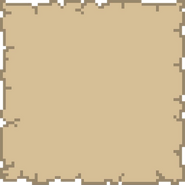 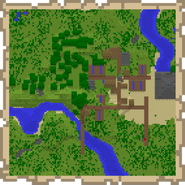 A Map with Generated Structures 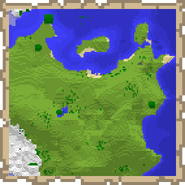 A Map of a section of the Overworld

Each map type on a grid with units of Zoom-Level-Zero-Map. The red square shows the relative size of the Zoom-Level-Zero map as well as the center of the larger map. 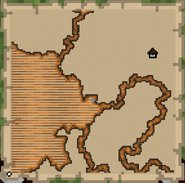 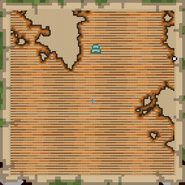